"... it 's a point of pride that no matter how hard things might get, I never walked."

This is the phrase that Haruki Murakami, the great novelist and amateur long-distance runner, use to describe the promise he had made. While he was running his first marathon he had to walk for some miles after some painful cramps. This action seems to ashamed him that much that he promised himself never to do it again.

When I first read his memoir “What I Talk About When I Talk About Running” about his running experiences I instantly adopted his promise. Although I have referred to it many times when I am running and my body reach its (limited) limits, I feel that I never felt to break it more than during last Sunday while I was running for the 10km Race of the 31st Athens Classic Marathon event.

This year due to my limited time for training I decided to run only the 10km distance, and I didn’t regret it. The race had a different starting point and a different route, which definitely seems easier than previous years. The starting point next to Zappeion while the finishing was at the classic Panathenaic Stadium as every year.

Sunday was a fine sunny day, probably a bit too hot for a marathon, but perfect of a 10km race. I started with a good pace and I keep running next to the 50:00 pacer until the 3rd km, at this point I started to leave behind. Everything was going smoothly and after the 6th km we spot turned in Mesogeion Ave. heading for the finishing line. Then since I was feeling good and I was a bit slower than expected, I decided to give a little more on my effort. But after a few minutes on my “super”-speed I felt a strange pain on my left chest that scared me. This pain make me to forget my target to finish in 52:00 minutes, with the excuse that I was not prepared and trained correctly. I decided to slowdown a bit more and revert to a comfortable pace, which I kept until the final kilometer. At this point you just cannot do anything less that give it all in, the view of the Kallimarmaro stadium at the end of Herodou Attikou Str. is the greatest stimulus. Finally, the entrance in the stadium was the greatest moment of the race, and this is what is all about. At these 100 meters you forget everything, all your pains goes away and you feel like a real champion.

I finished in about 56:00 net time as reported from the results here. I feel that this is a fair time given my training and preparation effort. My only promise is that I will try to do a better and more targeted preparation next year. 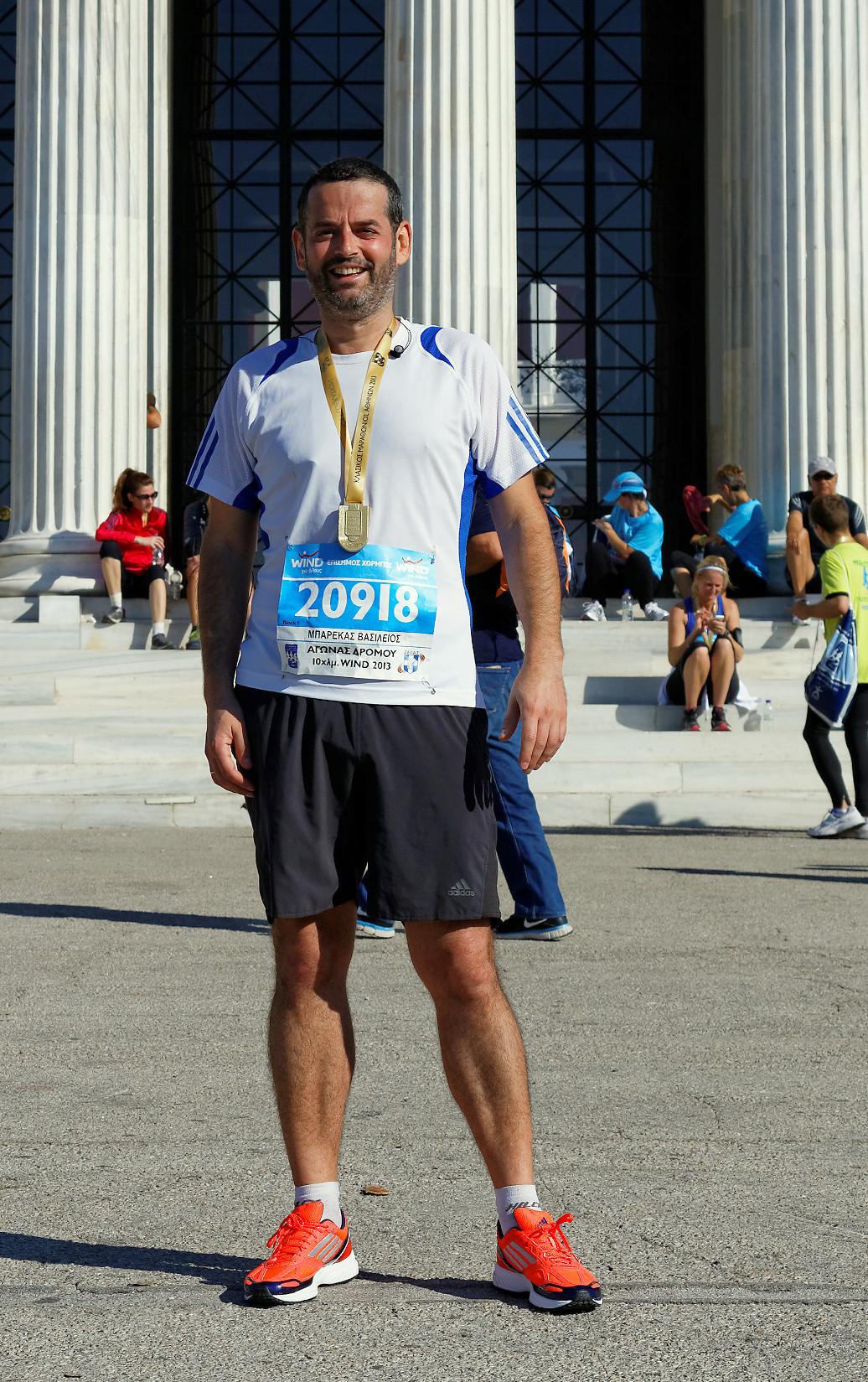 This is me in front of Zappeion posing with my medal.